The State of Commercial Real Estate in Houston

As I’ve mentioned before in previous articles, Houston is a large economic entity. It has had some of the largest success in a variety of industries. Unfortunately, if you’ve read any of my previous work, you also know that it has been hit hard recently. The construction industry is struggling and the recent drop in oil prices from 2014 has really done a number on Houston. And because of this, the Bayou City’s commercial real estate market has seen some collateral damage.

Known as the Energy Capital of the World, Houston’s skyscrapers were home to some of the largest energy companies in the world. However, after the oil price plummet, multiple companies were forced to close their Houston offices, leaving a staggering number of vacancies — 8 million square feet of office space to be exact. This also hurt Houston’s construction market, as multiple properties were being built, with no one to occupy the space. 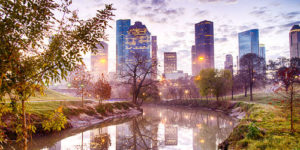 To make matters worse, loans that were taken out in order to rent the office spaces went into default, one of the largest being a $100 million dollar loan for One City Centre on Main Street. Goldman Sachs weighed in during early 2016, less than optimistic about the future of Houston’s increasingly vacant office buildings.

However, recent redevelopment of commercial spaces has helped bolster the market and produce positive outcomes for the city and those that work in it. The silver lining is that Texas is increasingly less dependent on the oil industry, with a decline in the market now being far less destructive than a decline would have been years ago. The Houston economy has become much more diversified, having learned lessons from the cautionary tale of the 1980s oil crisis. 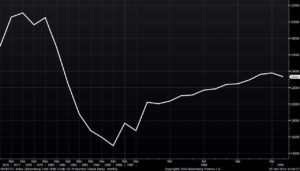 Oil prices dropped sharply in the late 1980's, sending areas dependent on the industry into turmoil.

Fast-forward to today, and things are getting better. While the office market is still struggling to keep up, the retail and industrial sector seems to be moving forward. Warehouses, in particular, have seen a fairly large amount of interest lately. As more and more consumers shift their attentions away from physical retail and towards online shopping, the need for warehouse space is increasing. A recent report from JLL shows a 60 percent increase in leased warehouse space in the last two years. The sheer demand for warehouses has driven the rental rates up 20 percent, to 59 cents per square foot of space.

At the start of 2017, the office market had at least stabilized. Companies have started looking into new development opportunities in the area. Though the vacancy rate has continued to rise, it has done so less drastically than in the past few years. Meanwhile, in the retail sector, the job loss has had little effect on the market, with 68% of current construction projects pre-leased. Vacancy rates in retail are also low, at 5.6%. Leasing is also doing well, and much of the space that is currently not leased is in projects currently under construction.

Even though there are silver linings for Houston’s commercial real estate market, the number of delinquent commercial mortgage-backed security (CMBS) loans is still going high. In fact, according to a study from Trepp, a global data and analytics provider, the number of delinquent CMBS loans has hit an all-time high, with a 429,000 square foot Houston building accounting for a $198.5 million loan. Although the delinquency rate problem is a nationwide issue, Houston accounts for a large majority of it.

View all posts by: Eros Adragna