In the real estate industry, collecting and analyzing demographic information can do a lot of good in determining trends on macro and micro levels. Recent years have demonstrated that one of the most important demographic shifts is generational, as more Baby Boomers exit the workforce and more Millennials enter it. This change, which has seen the percentage of Boomers in the workforce drop from 49% to 29%, has caused dramatic change in economic consumption. 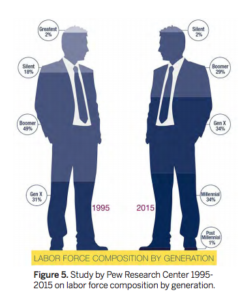 Any savvy real estate professional should pay attention not only to market trends, but to cultural shifts that occur as a result of demographic change. With Millennials well on their way to dominating the workforce, it is critical to understand the relations between the three most prominent generations, the third of which is Generation X. While Millennials are known in many respects for their proficiency with technology, Generation X consists of many who brought it to the forefront of culture. Many members of this generation are now doing better than they were years ago, their skills still a cornerstone of workplaces. 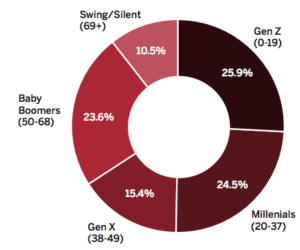 However, it is estimated that, by 2030, Millennials will comprise 70% of the workforce. This massive uptick necessitates an understanding of where they are living and working, as well as what their habits are. They are defined largely by their widespread use of the internet and technology, but also seek a level of flexibility in their lives regarding workplaces and career advancement. As a result, many take to cities to pursue professions in technology and have easy access to both their jobs and entertainment.

That said, the impact that Baby Boomers continue to make is not to be ignored. While Millennials are moving into urban areas and thus becoming one of the major demographics for realtors selling apartments, many Boomers are finding that, as they move into retirement, downsizing is a viable option. This can be seen by rental statistics between 2007 and 2013, with Boomers filling up 1.3 million apartments and Millennials only 459,000. Beyond this, the issue of retirement looms large over the real estate market for Baby Boomers.

Though Millennials have sought employment in cities, a significant portion are opting not to live in them. While commercial development has been bolstered by the desire to work urban, rising rent prices have pushed Millennials to suburbs with public transportation options facilitating an easy commute to work. These suburbs are a bit different than those that they grew up in, providing amenities similar to those found in cities. Additionally, the eventual prospect of marriage for Millennials indicates that suburbanization will likely be the norm in the coming decade.

Multifamily housing continues to be popular among Millennials and Baby Boomers alike. While economic recovery bodes well for traditional homes as Millennials get older, current home prices are forcing them to stay as renters for longer. For the Boomers, it’s a matter of wanting to downsize and worry less about housing. In any case, developers are often downsizing apartment sizes to keep rent affordable for both groups, and are more often providing comforts such as WiFi, recreation areas and larger common areas, some of which are now seen as a necessity. However, it is predicted that two thirds of Millennials will opt to own their own homes later in life, so it remains to be seen how long multifamily housing stays a staple.

Senior living centers are also changing, now starting to feel the pressure of a generation on its way to retirement. Over 50,000 senior living communities exist across the country, according to the American Senior Housing Association, and plans are in place for over 50,000 more. These facilities cater to a variety of demands, including residents with memory loss and those that require assistance or nursing care. Senior housing is an appealing investment in the real estate market, and ROI has been higher than all other forms of real estate for the past seven years.

Though there is an inherent risk in senior living, given the need for skilled operators, it is likely that it will continue to be a solid investment. This is at least partially because the high amount of wealth that Baby Boomers have accumulated means that developers will be taking on more lavish projects that provide as many services as possible in one location. However, any investors should ensure that they work with facilities that have a high level of operational quality.

However, amidst these residential changes, it’s also worth examining the ways that office buildings will be affected. As previously mentioned, a resurgence of property in less than desirable sections of city is a hallmark of urban job growth. However, the appearance of offices is changing. Millennials are not interested in the segmented cubicles that dominated office spaces for years. Instead, they see the office as a collaborative space, a trend that has seen the rise of the coworking industry.

Coworking has become popular among startups and entrepreneurs, growing to $20 billion in value over eight years. Experiments in coworking include London’s StartUp home, which combines spaces with apartments, making it easier for Millennials to live in cities. Savvy coworking businesses have continued to adapt to demand, focusing on short-term solutions for individuals and businesses and creating opportunities for collaboration. It currently remains to be seen whether this trend with endure stints of economic trouble without issue.

Even established offices for companies are moving more toward the model of coworking spaces, eschewing traditional layouts and setups for a closer, more tight-knit space; not unlike the apartments mentioned earlier. As a result, office sizes are getting smaller. It’s possible that these designs, already popular in urban areas, will transition to suburban offices as well as Millennials move to these areas. The key here isn’t necessarily being in the city; it’s being able to live and work within striking distance of necessary amenities. Accessibility and style of office are both factors to consider for developers in the near future.

The massive demographic shift has also created new concerns for retailers. In keeping with Millennial desires to be connected and in close proximity to things they want, many retail centers are focused on mixing things such as restaurants with shopping and other entertainment. This demand has created suburban spaces that increasingly resemble urban downtowns, in keeping with the rise of suburbanization. Amongst Baby Boomers, there is now a greater desire for accessibility as well as medical centers integrated into regular retail centers.

However, these are far from the traditional mall. Stores are now pressed to blend e-commerce in with their traditional offerings, allowing for shoppers to view products in-store and then easily find them online at a later time. This places somewhat of a burden on retailers, requiring more fulfillment centers within reach of their stores. Storage centers are even more important than ever for good supply chain management. 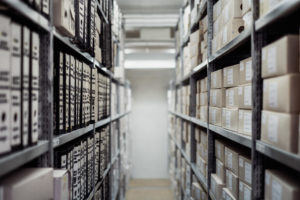 Urban development is also being influenced by these new trends. Now, large retailers are becoming a part of infill, and are trying to make themselves a part of the urban core to appeal to those living in the area.

Another somewhat fringe market that stands to grow in the face of the demographical shift is self-storage units. As previously mentioned, Baby Boomers are now starting to retire off of the significant amount of wealth that they have accumulated over their lifetimes. As they work to downsize to apartments, the question of property hangs over them. Because of the trend towards smaller, less expensive apartment offerings, self-storage is growing as a way for Boomers to better manage their property.

Recent concerns are that the industry is not prepared to deal with this new influx of demand. Experts also believe that a certain aesthetic, including paved roads, nicer looking security, and an attractive landscape will be necessary to attract Boomers, making many of these companies reevaluate their properties. Still, this will not put any sort of a damper on development, making self-storage a profitable and rapidly growing industry.

There is no question that the shift between generations has and will continue to impact real estate, among many other industries. The general shift towards suburban development with urban amenities has led to businesses clustering around these microcities, with extensive office development occurring in urban cores. In the future, expect more experimentation with both city residential housing and office space, and retail experiences becoming more diverse and centralized, integrating both traditional and experiential offerings. With Millennials moving into the workforce and Baby Boomers moving out, real estate faces new trends and is adapting to new generational needs and desires.

View all posts by: Eros Adragna